Last Friday morning I tweeted a list of ten things I think we need to do – and stop doing – to let love in to social care: a mini synopsis of the blog I’d just published. Gathering of Kindness Scotland retweeted my tweet, with the comment “And equally for healthcare 💟”

Ironically I then spent a significant part of the day in not one but two NHS hospitals (I’ll call them hospitals A and B), waiting with a friend for answers to her unexplained pain. Her experience, which she encouraged me to share in this blog, illustrates why my suggestions for letting love in to social care are indeed “equally for healthcare”.

“Just trying to wade through the process”

Having spent several hours in various parts of hospital A earlier in the week, my friend had been advised to return if her symptoms persisted. They did, and by Friday morning she was pretty sure that instead of going back to hospital A, she actually needed to go to hospital B. To check, she called NHS 111 at approximately 7am.

While she was waiting for a 111 nurse to call her back, she sent a group of us a WhatsApp message to say there was a chance she’d need to go in to hospital B that day as she wasn’t getting better, and could anyone come with her. I replied to say I could, and she said she’d be in touch when she knew more. Her message summed up the scripted 111 interaction and her weary acknowledgement of “the process”.

So by 12.30 we were in hospital A. And after roughly 5 hours of waiting – with the odd test and consultation thrown in to the mix – the registrar at hospital A agreed that she needed to go to hospital B, and duly referred her. When we arrived at hospital B, they admitted her – and apologised for the process, but explained it was necessary because they’d had too many ‘inappropriate referrals’.

By the time we finally got to hospital B – almost 12 hours after my friend first contacted the NHS to say that’s where she thought she needed to be – she’d explained her symptoms to the 111 advisor, the 111 nurse, the GP receptionist, her GP, the nurse who’d taken her blood samples, the nurse who’d taken her blood pressure, the junior doctor and the registrar. She went on to tell her story again to two doctors and a nurse at hospital B. And still she had no answers.

“We got there in the end”

On paper the NHS process worked. My friend got through to 111. She got a GP appointment within 30 minutes of requesting one. Hospital A knew she was coming, and hospital B were expecting her too. Each healthcare professional completed their task. She was ‘referred appropriately’.

But when the registrar told my friend that he was referring her to hospital B, he said that she “wasn’t a case for surgery”. In her words: “I’m not sure if he actually said ‘it’s their problem’ or ‘it’s nothing to do with me’ but words to that effect that made me feel dismissed.”

And as we put our coats on in preparation to leave hospital A and head off to hospital B, the junior doctor said ‘we got there in the end’. Did we? No. He got to his end. A referral. Box ticked. Job done. Our end was nowhere in sight.

“The one in chair one”

When we’d arrived at hospital A, we’d been directed to ‘chair 7’ in a smallish waiting area. The backs of our chairs were right up against the desk. But it soon became clear that the tiny gap between desk and chair was actually a chasm. An invisible barrier between healthcare worker and ‘patient’ – and gosh we were patient. And the more I heard and observed as we sat and waited ‘patiently’, the more apparent it became that it wasn’t just the barrier that was invisible.

A doctor came by to check some notes. When he asked whose they were, the receptionist replied “the one in chair one”. Not a person, or even a patient. Just a number.

Tests and conversations and waits and tests and more waits followed, until finally my friend realised that the registrar she’d spoken to was on the phone to hospital B. Behind the desk. Talking about her. And she, and I, and everyone else waiting for their own news, could hear his full conversation.. her name, her symptoms, what she’d told him, what he’d seen, what he thought.

He finished his phone conversation and his colleague emerged from behind the desk to ask my friend if the registrar had explained what was happening. Well yes, technically he had – to the whole room, but no – not directly to her.

Both doctors seemed oblivious to the fact that we’d all heard the telephone conversation. I guess when you identify people as chair numbers, you don’t need to acknowledge they can hear you. When people are invisible to you, so are their senses and emotions.

💟 Stop thinking ‘them’ and start seeing ‘us’.

“Her levels have shot up”

As he talked about my friend on the phone, she (and I, and everyone else in the room) had heard the registrar say that “her levels have shot up”. When he actually got round to having a private conversation with her, he explained that “her bloods were a bit raised” and he was referring her to hospital B.

Shot up. A bit raised. She queried the difference between what she’d heard him say to hospital B and what he’d said to her. He shrugged it off as the same thing. Really? ‘Shot up’ sounded a whole lot more significant to us than ‘a bit raised’. So who was he trying to kid? Was he exaggerating to make sure hospital B would accept his referral? Or toning things down to reassure my friend?

Stop ‘doing to’ people. Acknowledge they are the experts in their own lives and their own bodies. Involve them. Listen to them. Respect them. Be honest.

“What do you think is going on?”

In the taxi to hospital A, my friend had filled me in on her conversation with her GP that morning. She described how he had offered kind words and time in response to her tears. Instead of wading in with his prognosis, he asked her first “what do you think is going on?” – a genuine, open question demonstrating his curiosity and respect for her opinion, and giving her space to reflect and explain. When he offered his opinion in return, he clearly described not just his thinking but his reasoning too. She felt he was genuinely interested in her.

In contrast, in the taxi to hospital B as we reflected on the lack of humanity in the hospital A interactions, my friend described her experience in the same hospital earlier that week. She’d had a chaperone with her in the room while she had an internal scan. As she was preparing to leave – and still experiencing some pain and obvious discomfort – the chaperone asked “are you doing anything nice for the rest of the day?”

💟 Be (genuinely and appropriately) curious.

Tea in an NHS mug

When we finally made it to hospital B, it all seemed a bit more human.

The chairs didn’t have numbers. The doctors introduced themselves with the familiar ‘Hello, my name is…’ The nurses asked my friend’s name and whether that was how she’d like to be referred to. They called her by her name. They chatted – with us not just with each other. In contrast to hospital A, we both felt included, not excluded.

A nurse told us they’d found my friend a bed, and was keen to know what else she needed. A night dress? Toiletries? Food? Drinks? Her partner was on his way with supplies and the nurse jokingly speculated about what he would arrive with. When my friend reassured her that he knew her well, the nurse wasn’t convinced – referencing her own recent experience of receiving ‘Valentine’s knickers’ from her partner of 29 years. Her colleague chipped in with a story about a husband arriving with spare clothes for his wife and producing instead his small child’s underwear pulled hastily from the tumble dryer. Jokey, friendly, human conversations among women sharing experiences. Us, not them and us.

And in no time the nurse had brought cups of tea – one for my friend and for me. Tea in NHS mugs. Warm and welcome and – towards the end of a trying day – as good as a hug.

Focusing on the necessary

After two nights in hospital B, my friend was discharged and is feeling much better now. She’s concerned she’ll seem ungrateful, and doesn’t want to be perceived that way. While she admits that on Friday she felt like she was treated “as a piece on a conveyor belt”, she says that over the weekend in hospital B she was listened to and involved, and had “thoroughly brilliant care”.

She generously suggests her experience in hospital A was a result of understaffing and under resourcing, “which is not the fault of the doctors. They will just focus on the necessary if they are stretched and stressed”.

Thankfully I’ve had limited experience of hospitals, but to me hospital A seemed relatively quiet on Friday afternoon. Appearances can be deceptive, but the lovely volunteer who intercepted me on my search for coffee, and convinced me to sign up to play the hospital lottery, said she thought it was quiet too.

I’m obviously well aware of the pressures throughout the NHS, but I’m sure they are felt just as much in my friend’s GP practice and in hospital B as in hospital A. To me, the difference is more subtle. In hospital A I felt that the staff were treating symptoms. Cases. Chair numbers. Their focus was on their own diagnosis. Their own process. Their own outcomes. “The necessary” as my friend described it. In contrast the GP, and the doctors and nurses in hospital B, were treating people. They were genuinely curious. They listened. They respected my friend’s opinions. They were kind. They were human. In my view, that’s just as necessary.

And maybe, just maybe, that difference is love. 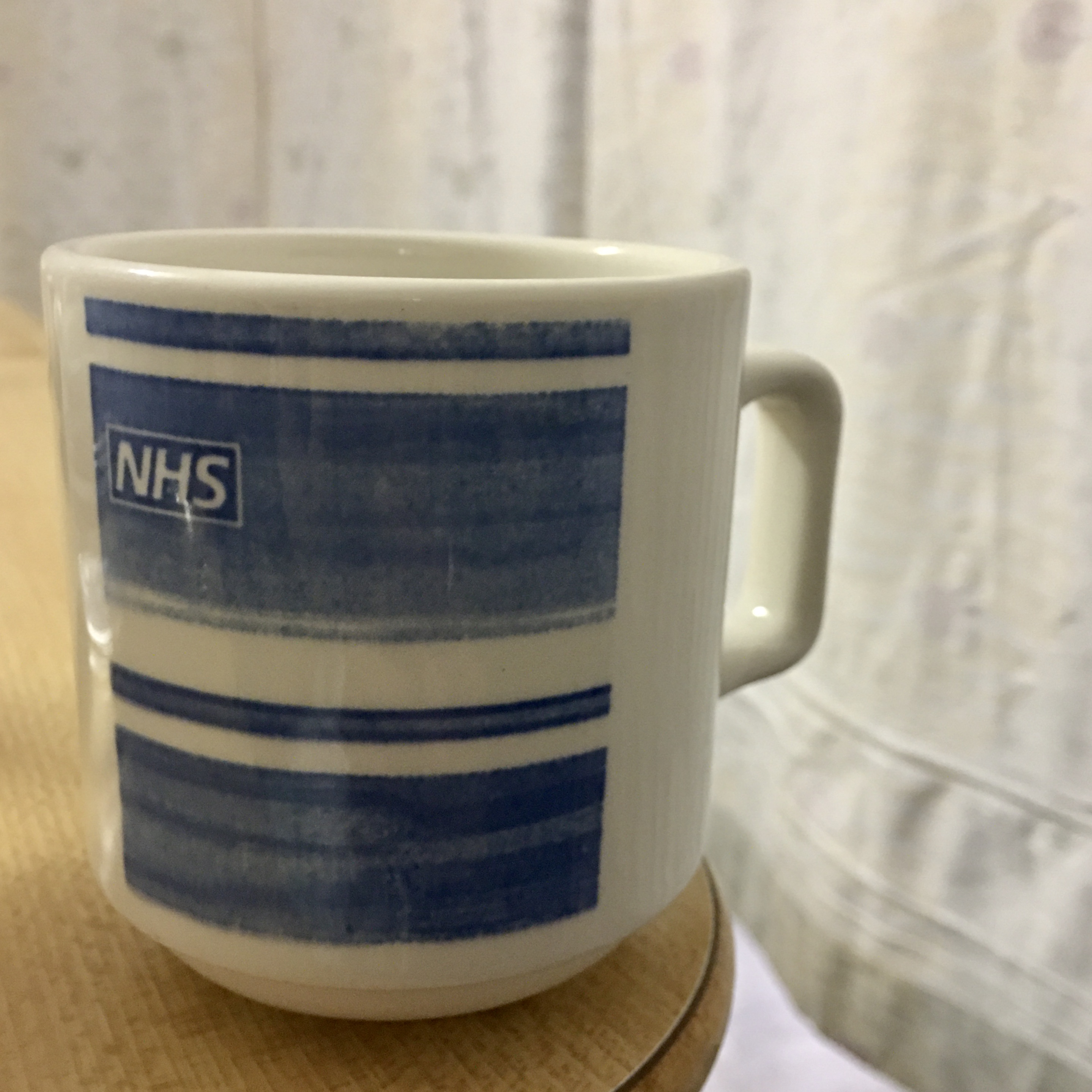